Life and the Universe of Yamamoto Junko

Yamamoto Junko creates pieces that all have to do with life in some way. André Malraux, who is quite famous in some circles for his experimental French fiction, used to say something like “Life is worthless, but nothing beats life.” While life is incredibly important, few people would actually be able to define it.

The exhibition at the Mizen Gallery that ran from January 10 until 24 in 2015 tried to answer that question, and it deal with many different topics in the medium of ceramics. The universe of Yamamoto-sensei’s ceramic pieces grapples with these serious issues. Yamamoto Junko wants to know what our reason for being is, and what each individual’s role is. 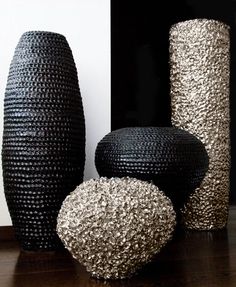 While his pieces deal with life, Yamamoto Junko prefers to work with grayscales.

Of course, life is impermanent and fleeting. These are themes are quite common in a variety of Japanese works of art. Nevertheless, the artist managed to put a new spin on many of the answers to these questions.

One might say that Yamamoto-sensei lives for his art, but this isn’t the only message that’s involved in it. The artist often tries to not only live vicariously through his art, but also provide a bit of a new answer to those who elect to gaze upon it.

What might shock readers, though, is that the overwhelming majority of his pieces that deal with these concepts are exclusively monochromatic. While life has many colors and hues, Yamamoto focuses only on single ones at a time. This gives him more of an opportunity to showcase how form more than color helps a piece to standout against a background of other similar pieces of work.

Dynamics and motion are what he lives for. Inspiration comes from the rhythmic aspects of life, which are then transformed into the visual by shaping a piece of clay. 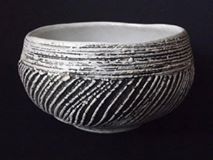 This tea bowl by Yamamoto-sensei is called the Layer of Time, and was made in 2013.

Fortunately, he actually elected to comment on this. While some individual artists prefer to remain silent on their own art, he was kind enough to provide a few words that help to describe the thoughts that go through his head.

While he admits that life is indeed limited, he also remarks that it’s thrilling for everyone and helps to define his or her experiences. Most importantly, he defines life as a spiral. Anyone who has taken the time to examine his pieces will notice very quickly how important the concept of the spiral is to him. Almost every piece that he makes is somehow sculpted in this notable form.