Tanoue Shinya is the latest ceramics artist to receive a healthy promotion on behalf of the Mizen Art Gallery, and an exhibition of his work will start with a bang. There is an opening reception on May 26. Until then, though, it might be useful to take a look at some of the things that the artist has said about himself in the past. He is an extremely active ceramic artist who currently runs a series of different exhibitions. We are very lucky to have his work on display at the Mizen Art Gallery.

Originally a student of theology at Doshisha University, Tanoue-sensei actually belonged to the ceramics club as well. He was reportedly absorbed in his work with clay. After he graduated he ended up working for a textile firm before entering Kyoto Saga Art College. There he entered into a program that featured a heavy emphasis on throwing. 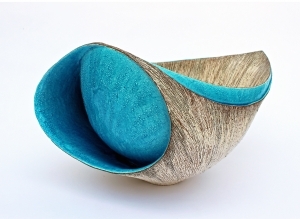 Interestingly the pieces that he made during his freshman year were the origins of the current series for which he is quite well known. Each of the pieces is quite simple, but feature details like lines and curves that have a notable sinuous vibe to them that’s something of a signature.

His techniques are quite interesting as well. After he creates the sculpture with a coil, a slip is then applied to the surface. After this, the surface gets grooved with needles before iron is rubbed into the grooves. The entire process takes quite a long time, but it’s worth it considering what he gets out of it.

In addition to working in these ceramic venues, Tenoue had done many other things in the field as well. He wrote for Ceramics Now in the winter of 2011 through 2012. Additionally, he had worked as a lecturer at Kyoto Saga Art College, between 2006 and 2011, but no longer teaches there. Apparently he wanted to have a complete career as a ceramic artist. The world of art is, of course, much richer for it as well. 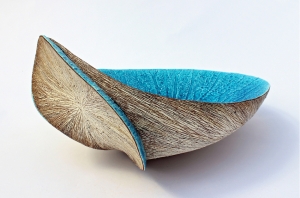 Shinya writes that shells are a constant theme of his art, and states that they’re related to the circles of life.

He wrote that he felt there is a great rift between teaching and working as an artist. It can be much easier to teach the techniques than it could be to illustrate the way in which an artist expresses emotion through their pieces. Valuable ideas might be anywhere according to the artist.

This philosophy has certainly worked for him, considering that he’s been shown in many different museums. He even has been creating new pieces for a Japanese resort hotel, and has been promoting a project in Singapore.