Tomoyuki Hoshino is no stranger to art exhibitions, but the new show that runs from January 28 until February 11, 2016 at the Mizen Fine Art gallery is something new in its own right. The artist has chosen “Anxious” as the theme for the exhibition, which is an interesting choice considering the fact that ceramic art usually depicts pensive thoughts. Most people have come to associate the form with more relaxed themes, and this will serve to challenge the expectations that those who appreciate this style of art might have.

Neritsugi techniques will be heavily featured, which are unique in their own right. These techniques allow different parts of the same objet d’art to work independently of one another. It’s an interesting special effect.ho 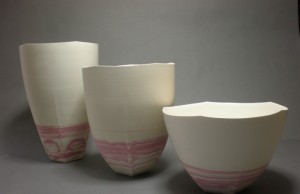 Hoshino Tomoyuki is perhaps most notable for his relationship with the clay, which can be seen in each of his works.

This will be the first exhibit of Hoshino Tomoyuki’s work in Europe.By using the Neritsugi style, the artist is able to achieve a unique marble effect that comes out looking as though it were white and pink. Viewing the art from a slightly different angle or looking at a piece of ceramic under a different type of light might actually help to let one see that there is more to this technique than originally meets the eye.

For instance, doing this might slightly change the color or appearance of texture. Originally the artist decided at age 27 to leave his previous place of employment and study ceramic arts in Kyoto. He has several other techniques up his sleeve as well. His unusual background might help to explain this quite well.

Generally he first assembles the lower part of the object with a nerikomi yakimono style to get the marbled look that he likes before he pieces together the upper part. He then makes use of an old traditional technique called dotsugi, which allows him to assemble the two disparate pieces together. 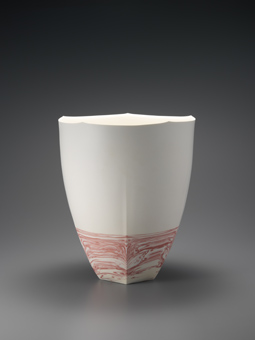 Most of Hoshino Tomoyuki’s pieces feature porcelain combined with a second material. Many of his pieces share this same unusual juxtaposition of color.

When this technique is employed, it creates a thin pink line in the middle of the ceramic vessel. Since most of the object is colored white from the presence of a white clay rock called kaolin, this provides some fairly drastic contrast. This helps to really make the piece stand out, since the contrasting yet complimentary colors ensure that it’s really eye-catching.

Veins can sometimes become even more outstanding, which helps to continue to draw attention to this type of art. It’s a really stunning effect, and photography doesn’t do justice to it. Despite the ceramics being contemporary, they take lessons from very traditional styles and techniques.