One of the biggest pieces of news in the art world right now is the fact that the Musée Rodin just reopened on November 12. The museum, dedicated to Auguste Rodin and his famous bronze pieces, was in bad shape and required major restoration work. This isn’t the first time that it had some difficulties, however.

The museum was originally a building owned by the French state that was being let out on a room-by-room basis. The tenants back in the early 20th century were generally artists and performers who didn’t have much money. Eventually they were unable to pay rent, but Rodin himself ultimately rented out an entire floor of it to use as a studio.

The Rodin Museum is certainly a sight to behold even without the sculptures.

Rodin, himself, was no stranger to controversy at all. When he was commissioned to create a monument to the famous novelist Victor Hugo some years before that in 1889, he made the bronze look nothing like people had expected, and this could be considered a stroke of excellent fortune today. Viewers of that time period, however, weren’t nearly as charitable.

Naturally, what people might not have liked at the time, is considered a stroke of true genius today. The fact that he worked in bronze made his pieces consistently expensive to make, and they were difficult to transport. These aspects leave a feeling of permanence and strength in the eyes of modern viewers. 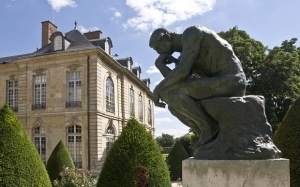 The Thinker is perhaps the most famous example of French sculpture. Photo credit: The Telegraph

Today the museum looks immaculate again. The building itself has undergone heavy restoration work, and those artifacts that were directly tied to Rodin’s life have been redone. Fortunately his great bronze sculptures have survived the ages. Many of these, perhaps most notably The Thinker, are among the most famous pieces of three-dimensional art in European history of any age.

They’re not only national treasures for the French people, but they belong to the world in many ways as they’ve become symbols of all of civilization. They’re certainly well known by even those who are outside of the world of art history to say the very least.

What might interest historians, though, is that there is a section of the museum with a number of items that are related to the work of Camille Claudel. She was not only Rodin’s student, but reports say that they might have actually been involved in a relationship as well. All of these additional exhibits will certainly prove to be extremely interesting to those who enjoy the main attraction.